​This page is dedicated in memory of John Rock Wales.  A respected veteran, engineer, and community leader, John leaves a lasting legacy of love for his family and community. We are honored to recognize John for his lifetime of work and commitment to caring for others.
This generous gift will help build two MSU AgeAlive community outreach and life enrichment programs in partnership with the East Lansing Prime Time Seniors Program and the MSU Social Science Scholars program, specifically the Senior Ambassador Program and the Town and Gown lecture series. In 2022, the John Wales Scholarship fund supported an internship for a student in the Social Science Scholar’s program, and a John Wales Lecture in his honor.

​
​John Rock Wales was born to Rock Ora Wales and Louisa May Herbst on February 15, 1926, at Sparrow Hospital. His deep roots to the Lansing area began early on, as he was raised on the same East Lansing Road that he would later build his own home on and raise five children.

When John was six years old, he went to the YMCA Mystic Lake Camp for the first time in northern Michigan (Lake, Michigan).  Not only did this experience begin the tradition of several generations attending camp as well, but it shaped a big part of John’s life.  His parents were so enamored with one of the local lakes in particular, they bought property on Crooked Lake and built a small second home.  Years later John would buy his own piece of property not far from his folks and build a modest cottage for his own family to enjoy.  Over many years this slice of heaven provided fishing, swimming, boating, water skiing, ice-skating, cross-country skiing, snow shoeing, nature walks, and deer and bird watching that the entire family (kids, grandkids, and great grandkids) enjoy to this day.

John’s first job while in the tenth grade was in the Michigan State College’s poultry department cleaning up after and caring for the chickens for 25 cents/hour.  It was then that he bought his first car, a 1934 Ford Sedan, and gas was $1 for 5 gallons.  At Eastern High School he played first chair clarinet and the band would often go to the Marshall Street Armory early in the morning to play and send the troops off to war.

It was after high school graduation and attending one term at MSC (now MSU) that John enlisted in the US Navy in 1944 at the age of 17.   John was sent to the Great Lakes Training Station (boot camp) and from there to Carrier Corporation in Syracuse, NY for training in refrigeration maintenance, given his aptitude for mechanical skills.  He served on the USS Antrim in the South Pacific, as Motor Machinist Mate Second Class in charge of all refrigeration aboard the cargo ship.  In May 1946 John was honorably discharged after WWII and resumed his education at MSC, graduating with a Bachelor of Science in Mechanical Engineering.

Upon leaving the service and settling back into school, John also took up roller skating at the Palomar Rink on Michigan Ave.  At that time there were not many places single women could go unescorted by a male companion, but the roller rink was acceptable and that’s where John met his future bride.

John and Carrie Irene were married September 23, 1950, upon John’s graduation and settled into the “garage house” his parents had built while he was in the service, adjacent to the house where he grew up.

Along with the arrival of their first child, Betty, came the incentive to build their own home down the road in 1952.  Four more children followed and were raised in that same house, Steve, Jeff, Mary, and Linda. Many transformations were completed along the way, and John lived the remainder of his years in this same house that he so passionately poured his heart and soul into.

Following graduation, John joined Auto Owners Insurance Company in 1950 as the Manager of Maintenance and Building/Operating Engineer.  Throughout the years he attained a number of achievements, his promotions including Manager of the Mortgage Loan Department, Assistant Vice President of Real Estate and Service Division, and Executive Vice President, Secretary and Treasurer.   John retired in 1991 after 41 years of service.    He also served on the Board of Directors until 1996.

Along with his work responsibilities, John never lost sight of his hobbies and community service.  Favorite pastimes included woodworking and building projects, toy making and donation, clock repair and collecting, antique collecting and restoration, gardening, and following his Spartans.  John was a nature enthusiast and never missed an opportunity to bird, loon, or deer watch, enjoying all forms of wildlife.  To that end, he was passionate about land conservation, nature preservation, and environmental issues.  But by far, traveling with his entire family over many years, and spending time at his beloved Crooked Lake, brought him the most pride and enjoyment.

As a young family, vacations consisted of camping and traveling northern Michigan.   Much later, the entire family and grandkids enjoyed many trips together, taking cruises and exploring diverse destinations.  Spending time with family was everything, and the family cottages at Crooked Lake held fond memories.

John was a strong supporter of his communities, and active in many civic organizations.  Along with his wife Carrie, their dedication and volunteer service to community and church was a key part of their lives.  He was involved in the Parkwood YMCA, People’s Church, Habitat for Humanity, and supported numerous other charitable organizations as well.

As an active member of the YMCA of Greater Lansing, he helped fundraise to support scholarships for the youth summer camp at Mystic Lake Camp. These camps later developed into sponsored family camps and other year-round focus groups . He also funded a new dining hall-kitchen at Mystic Lake Camp, hoping to spare the organization the hardship of repairing the aging space and replacing equipment. Though the camp was eager to name the building after John, he emphatically insisted that he receive no recognition – another example of his selfless character. He also volunteered his time with Adventure Guides, Cub Scouts, and Boy Scouts.

John's ties to the East Lansing community ran deep. Beyond his standing as a lifelong member of Habitat for Humanity and The Peoples Church, John was a respected leader and major financial supporter of PrimeTime, attending activities and meetings whenever he could.

John was also a staple of the university scene. He was a dedicated and generous donor to the Wharton Center and College of Engineering, an avid Spartan football fan, frequent supporter and visitor to the MSU Horticultural Gardens and Dairy Store, and a long-time member of the University Club. His son, daughter, son-in-law, and granddaughter have all gone on to graduate from MSU. They have all learned from his outstanding example and continue to support MSU and the surrounding community.

In his later years, John was a devoted caregiver to his wife, Carrie, of 64 years until her passing in 2014. John joined his beloved wife June 13, 2020, passing away at the age of 94 after a lifetime of dedication to his family and community.
​ 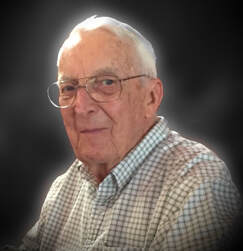